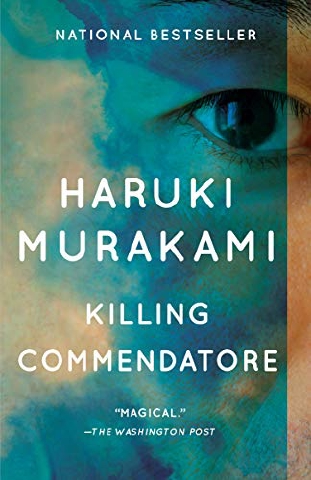 “Perhaps nothing can be certain in this world,” I said. “But at least we can believe in something.”

“I might not stay here all that long,” my wife said, somewhat reluctant.
“Everyone might go to the moon,” I said.

As I gazed at my reflection I wondered, Where am I headed? Before that, though, the question was Where have I come to? Where is this place? No, before that even I needed to ask, Who the hell am I?

The trip was only an hour and a half, but it felt like I’d taken a day trip to a far-off foreign land.

“…Going abroad awakens your own ethnic identity or something.”

“…there should be a few lessons I should learn. The courage not to fear a change in one’s lifestyle, the importance of having time on your side.”

Everybody has something they speculate and wonder about, no matter how blessed their circumstances.

“The way I see it,” Menshiki said, “there’s a point in everybody’s life where they need a major transformation. And when that time comes you have to grab it by the tail. Grab it hard, and never let go…”

“There are things people are better off not knowing. That’s all I can say.”
“But whether you know it or not, it ends up the same. Sooner or later, suddenly or not suddenly, with a loud knock or a soft one, that’s the only difference.”

“…Are you sure that’s enough?”
Menshiki nodded. “It is. Instead of a stable truth, I choose unstable possibilities. I choose to surrender myself to that instability…”

Everything remained on the level of perhaps.
A thought suddenly struck me: I wish my sister were here.

“People devote a lot of energy to thinking about things. Whether they want to or not. Yet in the end we all just have to wait—only time can tell how events play out. The answers lie ahead.”

“Sometimes I think I’m empty,” he confessed.
“Empty?”
“When I was young, I saw no limits to what I could achieve. […] But when I passed fifty, I looked at myself in the mirror and discovered nothing but emptiness. A zero. What T. S. Eliot called a ‘straw man’.”

I followed the line where the sky met the water from end to end. No human being could draw a line so beautiful, whatever ruler they might use. Below that long, straight line, countless lives were thriving. The world was filled with so many lives, and so many deaths.

“…You would have to remain here for eternity. The river is cold and deep, and the current is strong. And eternity is a very long time…”

She made no sound, but the trembling of her body told me she was still crying. I kept stroking her hair. As if she and I were heading upstream along the river of time.

I couldn’t. I didn’t have the right. … There was but one person in the world who did … But he would never exercise it.
We all live our lives carrying secrets we cannot disclose.

He had been in a coma for three days, and in the end his heart simply stopped beating. It shut down quietly and naturally, like a locomotive pulling into the last station.

In this real world of ours, after all, nothing remains the same forever.

“If that’s true,” she said, “then that’s one heck of a hypothesis.”
“Perhaps nothing can be certain in this world,” I said. “But at least we can believe in something.”
She smiled.